I'm evaluating Bongo 2.0, and would like to use it to work out some vehicle suspension kinematics. I can't seem to figure out how to make Universal join constraints stay connected.

I have created a small spline and point to drive the vertical tire movement, it's snapped to the upper ball joint. It moves up and down around 2". I would like this to only drive the height of the suspension travel, not exact position.

The control arms are both set as hinges, rotating about Y axis, in local object space.

I linked the lower control arm to a 'universal' point, and linked that point to the spindle (vertical member line). I linked the top of the spindle to another point, which is constrained to the animated point on a path.

I did similar for the upper control arm, except I didn't link it to the spindle, as they are both linked to a universal location at the top.

When I animate the suspension travel you can see the points become disconnected.

I am just starting out so I am hoping there is a setting to have all connections force to stay together. (2nd picture)

I’m probably a bit late (was off-line for a time), but anyhow for what it’s worth a few remarks.

I noticed in model suspentionbit1001.3dm that the lower triangle (LCA)’s pivot’s Y-axis isn’t in line with the  triangle’s  side, as you can clearly see in the Right view. Neither is his parent’s pivot ‘Object 28’. Since the object is ‘driven’ by the Y-rotation keyframes the triangle will NOT rotate along his side. In your initial version (model suspentionbit.3dm) there was no Object 28 (for some reason Marika introduced it), the triangle was rotated directly, BUT his pivot was in line with his side. 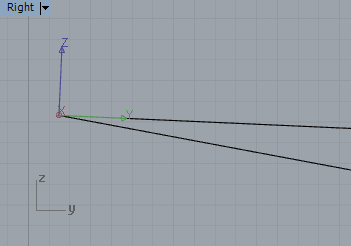 I don’t know whether it is intentional that the triangle side isn’t horizontal (looking at the upper triangle I think it is, looking at you images Front_Susp_7.jpg and GTM Kit Build Pics 063.jpg I think it isn’t), but when it is deliberate it is important that you keep the pivot in the correct direction.

Secondly, I see that some objects in the system are superfluous (points Object 28, Object 25 (original LCA_Pt), Object 26 (original UCA_Pt)). Although they don’t hinder they can be omitted (provided that the universal joint properties of LCA_Pt are transferred to the ‘Spindle’)

Also, it is unnecessary to make point Objects 27 and 29 Hinges. The default Constraint ‘Keep pivot location the same' allows rotation of the pivot in all directions. I personally always strive for simplicity, hence clarity and straightforwardness in IK-systems.

An adapted version in attachment.

Thanks Luc, I think I understand all your points. I haven't looked at the updated file yet, but Marika's last one seemed to solve it, which was simplifying the overall chain. Putting a point at the spindle upper and lower, and making those universal hinges.

The angles of each LCA/UCA are intentional yes, and the hinge needs to be angled like your 2nd picture.

I'm still building out the 3d models, then will try to get the motion happening with the correct 3d models.

OK Carl. Don't hesitate to get back when in trouble.

PS I guess you don’t know there's a specific Bongo forum where lots of action is going on. Have a look at http://discourse.mcneel.com/c/bongo