3-D printing a long ago moved from being theoretical to a reality, and in recent years 3D printers have become cheaper to produce. Experts predict 3D printers common in home in coming years.

Science and Technology behind 3D printing:

3D Printing is proving to be one of the most game-changing technologies of recent times, giving consumers the ability to produce real-life, 3D objects in their own homes. With developers and the general public introducing more and more applications of the technology, interest is certainly picking up.

3D printing is a form of additive manufacturing, which should give a major hint to how the process works. In a nutshell, the objects 3D printers produce are created by adding many different layers until the intended object is formed.

It all starts, of course, with a digital concept. Computer aided design (CAD) software is used to create a virtual replication of the object on the computer, and this design is then sent to the printer to be produced in real life.

Whatever material is used to create the 3D item, the software first breaks the object down into thousands of incredibly thin 2D layers. Following the design generated on the computer, these layers are then successively added on top of each other until the final object is completed.

As such, if you look closely at most 3D printed items, you may be able to spot the minuscule layers that have been accumulated to create it.

While most objects created by 3D printing so far have relied on simple materials such as plastics and rubber, the increasing scope of applications could see the technology expand in future. For example, some people are already ‘printing’ chocolate and other sweets by using sugar as the printer material.

It will certainly be interesting to see how 3D printing develops in the future and what other items can be created.

"3D Printing has the potential to revolutionize

the way we make almost everything." 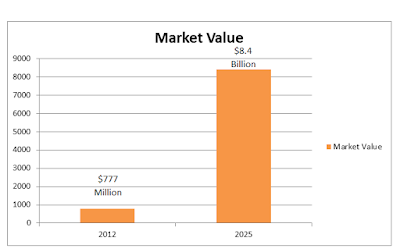 You can clearly see the increasing market value of 3D printing industry and its scope.

Wouldn't it be interesting in the coming years we could print whatever we want and use it!

Comment by Deepak Patel on February 17, 2016 at 7:42pm
More and & more materials in metal precious and non precious are been introduced as the calender progresses. The durability, usability , perfection and stability of this 3d printed materials is end less.

Another view from someone that has been following the industry for the last 25+ years.